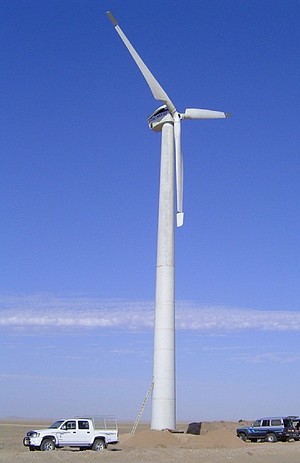 Everyday, the world produces carbon dioxide that is released to the earth’s atmosphere and which will still be there in one hundred years time. This increased content of Carbon Dioxide increases the warmth of our planet and is the main cause of the so called “Global Warming Effect”. One answer to global warming is to replace and retrofit current technologies with alternatives that have comparable or better performance, but do not emit carbon dioxide. We call this Alternate energy.

By 2050, one-third of the world’s energy will need to come from solar, wind, and other renewable resources. Who says? British Petroleum and Royal Dutch Shell, two of the world’s largest oil companies. Climate change, population growth, and fossil fuel depletion mean that renewables will need to play a bigger role in the future than they do today.

In November 2005 a utility-scale wind turbine was connected to the electricity distribution grid of the ErongoRED to exploit the wind resources at the coastal town of Walvis Bay, Namibia. This project constituted the first renewable energy initiative based on wind generation by a Local Authority in Namibia and southern Africa. Apart from supplementing the power supply to Walvis Bay and, in particular, consumers at Mile 7, the project provided a learning environment to develop local expertise in the assessment, design, implementation and operation of grid-connected wind energy converters.

A refurbished 220kW, three-blade, stall-controlled Wind World W-2500 turbine (1989 manufacture), with a rotor diameter of 25m and a hub height of 31m was installed. The key outcomes of this project are a wide range of capacity building achievements, an operational wind turbine on the Namibian electricity grid, a clear business directive for future wind parks and valuable lessons learnt.