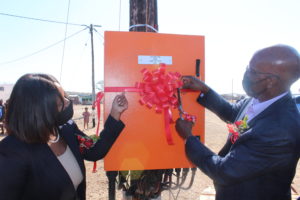 “I know it probably makes more financial sense for a company like Erongo RED, a Pty Ltd company to use its capital and resources on more densely populated centres where the per-unit cost of electrifying households is lower than the less dense rural areas.  But this initiative shows that, you as a company do indeed have a broader vision than just making a profit but have bought into the national vision of reaching universal access”, the Honourable Minister further said.

Also speaking at the inauguration event was the Chief Executive Officer of Erongo RED, Mr Fessor Mbango who said that Erongo RED is cognizant of the Ministry of Mines objective to bring services to the people. Thus, as a company, Erongo RED is working hard to supplement the Government’s efforts in bringing the much-needed services to its residents.