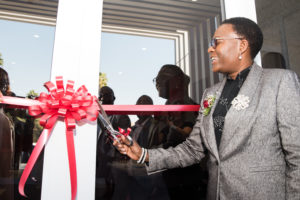 Erongo RED officially inaugurated its newly built Customer Care Office in Omaruru on Thursday, 27 June 2019. The Deputy Minister of Mines & Energy, Hon Kornelia Shilunga who had the honour to officially inaugurate the new office emphasized said that “all key and important functions of the organisation will be housed under this building which is good for coordination and service delivery”.

Hon Shilunga further said that the new building will not only give the employees a sense of belonging but also job security and a place they can call “home away from home”.

“I would like to congratulate Erongo RED for their initiative called “Power to the People” which is aimed at bringing electricity to rural and peri-urban areas applauded the Deputy Minister.

Speaking at the same occasion was the Chief Executive Officer of Erongo RED, Fessor Mbango who said that Erongo RED has made it its mission to implement the Harambee Prosperity Plan especially in the sphere of rural electrification, peri-urban electrification and infrastructure development.

The inauguration event was attended by the Governor of Erongo RED Region, Hon Cleophas Mutjavikua, various Mayors, Regional and Local Councillors, captains of industry and the community of Omaruru in general.