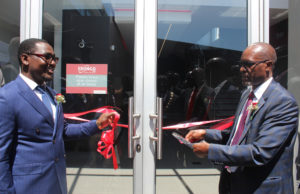 On Wednesday, 14 March 2018, Erongo RED inaugurated its revamped Head office in Walvis Bay. The modern office in the heart of Walvis Bay’ CBD, will service business and residential customers. The entire project amounted to N$31 million and it was completed in two phases. The first phase consisted of the ground floor whilst the second phase consisted of the first floor and additions to the existing building. The building was inaugurated by the Minister of Mines and Energy, Honourable Tom Alweendo. Speaking at the inauguration, the Honourable Minister Alweendo said that “access to electricity remains a challenging issue and requires concerted efforts by regional distributors to bring electricity service to the people”. He further thanked Erongo RED for the “Power to the People” initiative which is aimed at bringing electricity to rural and peri-urban areas.

Also speaking at the inauguration, CEO of Erongo RED, Mr. Fessor Mbango said that the “design of the building was done by Bob Mould Architect, and local contractors and sub-contractors were used”. “Throughout the construction period, there were job opportunities created, as well as spin-offs to more than 15 local suppliers, of goods and material,” said Mbango.